Chocolate is the Answer to Life

Last week, I was trying to teach my kids about segment and angle addition along with what it means to have a midpoint or bisector. After a couple days of practicing, writing, and solving the equations that are formed, I moved on thinking they got it. They took a quiz, and I realized they had NO clue what I was talking about. So like any good teacher, we practiced it some more, made a poster, drew pictures, and wrote lots of equations.

On Friday, we came back to those topics in the warm-up, and they looked at me like, "An equation? You want us to come up with an equation without you giving it to us?? WHAT?" I was so frustrated because we had spent almost 5 days on these topics, and they still had no idea that you can add two segments together and get one big segment or two halves of something equal each other. (Banging my head against a wall here.) Bonus: We were going to take a test during the second period that I see them that day, and they were clearly not ready. At this point, I was at a loss with no clue how to help clarify things for them.

BUT then I thought about all the delicious chocolate I have stashed in my filing cabinet.

Let's be real...chocolate saves lives. (This might be an exaggeration, but it gets me through good, bad, long, happy, sad...all the days.)

It just so happened that I had a few mini Hershey's bars left. These are broken into 4 chunks, perfect for a demonstration of segment addition. I break one bar in half and the other bar I break into 1 and 3. 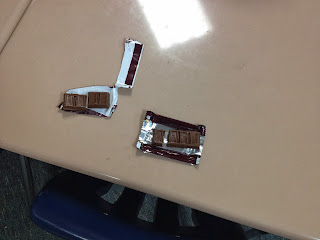 Midpoint/Bisector: We looked at the one broken in half and saw that 2 does in fact equal 2.

I watched SO many light bulbs go on!! Such a great feeling but then was mad that I didn't think of it sooner. I explained this idea and drew pictures of these things happening, but they needed to physically see it happen.

The plan for next year:
Chocolate solves so many problems.

Stealing is not wrong.

Baking is probably my most favorite thing to do. People at work and in my Bible study last year are most grateful that I love to bake. My roommate got excited the other day when the baking pans came out of the cupboard. She knew something great was coming.

Of course I was making everyone's favorite...sopapilla cheesecake. Delish!

My roommate in college made sopapilla cheesecake fairly regularly, which was before I got diabetes, so you can imagine how much I ate.

Then, a couple years ago, we had a mexican themed lunch at work, so I decided to try the cheesecake deliciousness myself. I didn't want to bother my roommate for her recipe, which meant I had to find one on my own. Enter: the internet.

All I did was Google sopapilla cheesecake and it brought up all sorts of recipes. I was completely overwhelmed and didn't know which one to pick. BUT I stumbled upon a blog, read through it and decided if a real person liked the recipe it was probably safe.

And so my only rule for baking was born.

When looking up recipes on the internet, only use blogs not the recipe websites.

My Reasoning: If someone loves baking enough to write about it, then they probably made something yummy and might even help me learn something so I can improve.

My Findings: Every single recipe I have used from someone's blog has been devoured. The recipes I have used from recipe websites are ok, but there's always at least one ingredient that is a) uncommon or b) not measured right.

So, I stick with blogs.

Now you know my secret. Stealing is not wrong. Go ahead...Steal my secret. :)

Bonus: Here's the recipe I found for sopapilla cheesecake. Her blog has pictures, but I am not that organized. I put her recipe down below and added the changes I've made to it to make it have less fat. It's the easiest thing ever. You cannot mess this up.

Spray a 9 x 13 pan with cooking spray. Unroll and press 1 can crescent rolls into the bottom of your baking dish press the seams together.

In a separate bowl blend the cream cheese, 1 cup sugar and 1 1/2 tsp vanilla, then spread over top of dough.

Unroll the second can of crescent rolls and place on top of the cream cheese mixture pressing seams together again.

Melt butter and pour over top layer of crescents. Mix the reaming 1/2 cup of sugar & cinnamon together.

Sprinkle cinnamon sugar mixture generously over the top. You can make more if you want, but I've never had to.

Bake at 350 degrees for 30 minutes until bubbly and bottom crust is slightly brown. Cool, slice and enjoy!
Written by Connie at 10:13 AM 2 comments: