This week, we've been state testing. (YAY...not) I have been pushing the kids a lot over the past few weeks to prepare for the Algebra 1 End of Course Exam and praying that they finally pass this time. I teach a low group of kids. They struggle with math and always have. We fight the battle every day of giving up and not trying if it gets the least bit hard. It can be frustrating, but many days my eyes are opened to where their struggles began in math. Such was the case today.

Since we're testing, I knew throwing new information at them was useless. I decided to make them do some puzzles. I figured this will be fun, they will work together, and they will finish in no time. WRONG. A few thought it was fun, a small number worked together, and they didn't finish.

Here's how things went down.

Monday:
4 kids and I worked on one 1000 piece puzzle. I told them to find the edge pieces, and they looked at me with bewildered expressions.

Me (in my head): ARE YOU TELLING ME THEY'VE NEVER DONE A PUZZLE BEFORE?! Ok, Connie, calm down. Teach them.

So I proceed to show them what the edges look like. We move on and the four kids begin to figure it out. They are enjoying themselves and work silently for 2 hours. MAGIC. 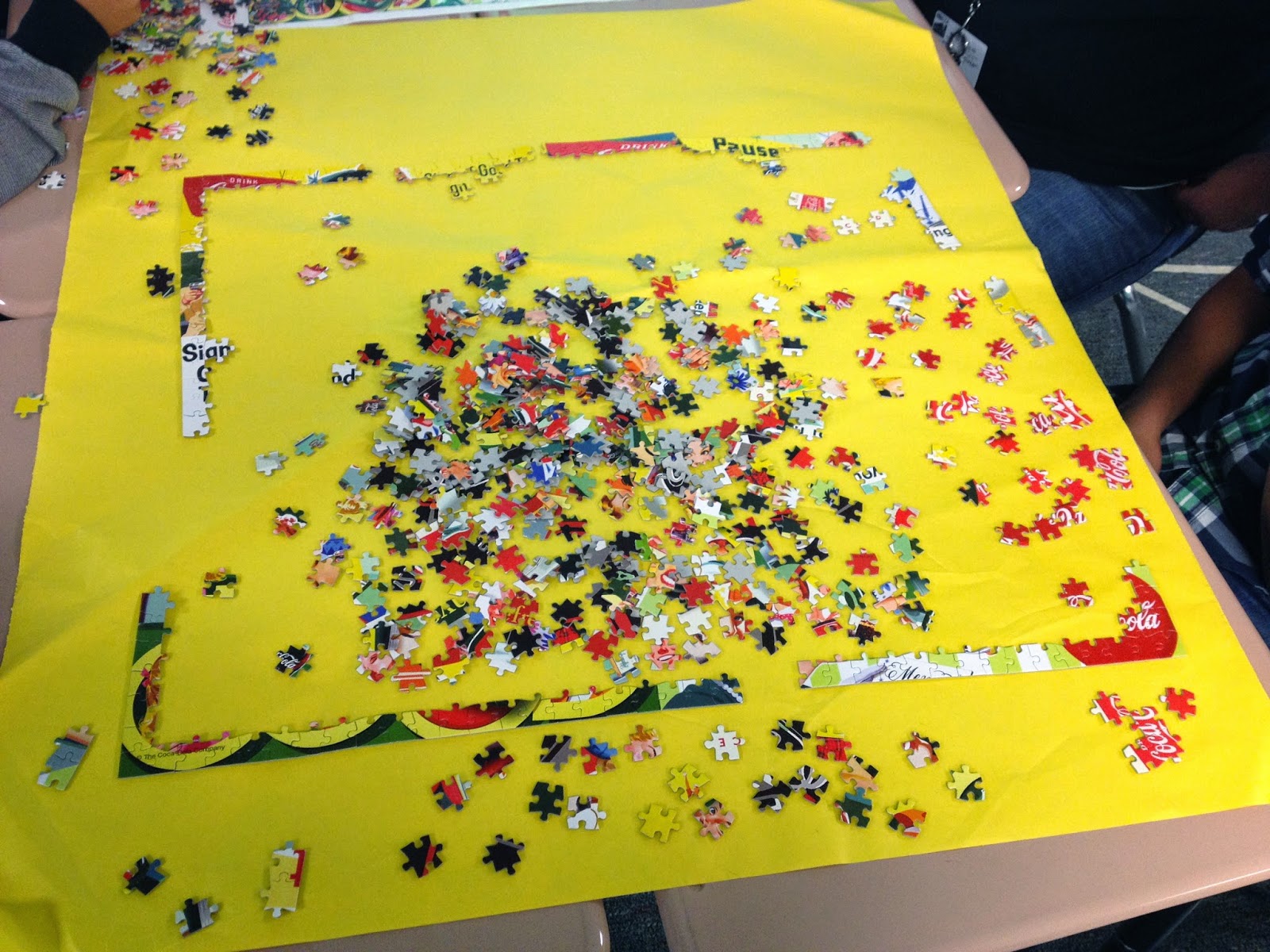 Tuesday:
The whole class of 19 is back in my room, so we will continue the puzzle trend since it was so fun the first day.  I have three puzzles around the room, one already started (from Monday) and the other two still in the box. I let them choose which puzzle they want to work on, I say go, and they all get started.

Then, the complaining begins.

Me (in my head again): ARE THEY REALLY COMPLAINING RIGHT NOW? They are doing puzzles.

So as patiently as possible, we have a mini lesson on doing puzzles. I explain it's a little overwhelming to approach the whole puzzle all at once. Start with the edge pieces. Then move through the puzzle focusing on smaller portions.

Do they listen? Of course not.

They continue to complain that the puzzle is too hard and sit there chatting instead of working.

A little frustrated at this point, I sit down and work with each group hoping they'll get an idea of where to begin. Most of them don't.


Why is this so puzzling? *excuse the bad puns*

Taking a step back, I try to figure out why this is so difficult for them.


This is convicting for me. What have I taught them this year? Did I teach them skills or just how to pass a test? Or are they just not able to transfer the skills they have learned? How could the year have gone differently, if we had done this first?

I have to remind myself that I did my best with a tough group of kids and remember where they started in August.

But let's come back to the last question. How could the year have gone differently, if we had done this first? I think it could be a really great activity for the first week of school. It introduces team building, geometry (edges, rectangles, shapes fitting together), and problem solving in a simplified way (breaking big problems into many smaller ones).

I'd definitely start with smaller puzzles (~300 pieces). Since the kids struggle already, start small, and build up to a more challenging level. Each team would get a puzzle all with the same number of pieces, they have one/two class periods to work on it, and there would be some incentive for the team that finishes first.

The other thing I must remember is not every kid agrees that my way is the best. They may be slow, but they are struggling through. This is a good thing. I'm really trying to not be Sheldon... :)